Psychedelic Drugs: Why You May Be Risking More than a Bad Trip Often the center of news, movies, and music about hippie culture, psychedelic drugs come in several shapes and sizes. Long a part of human religious ceremonies, counterculture, and medical treatments, these substances are currently illegal in the United States. Despite this fact, many people continue to use them for various purposes. Although many people claim these drugs are not addictive, they still tend to be abused and can carry serious consequences.

Struggling to quit psychedelic drugs can be challenging to do on your own. Even if you make it through a detox program and become sober, you may end up relapsing without the skills for long-term recovery. At Northpoint Seattle, we know how important it is to tailor your substance abuse treatment so you can learn the skills necessary for your journey. Our outpatient programs make it easy to stick to your schedule while receiving help. Call 425.414.3530 today to get started.

What Are Psychedelic Drugs? 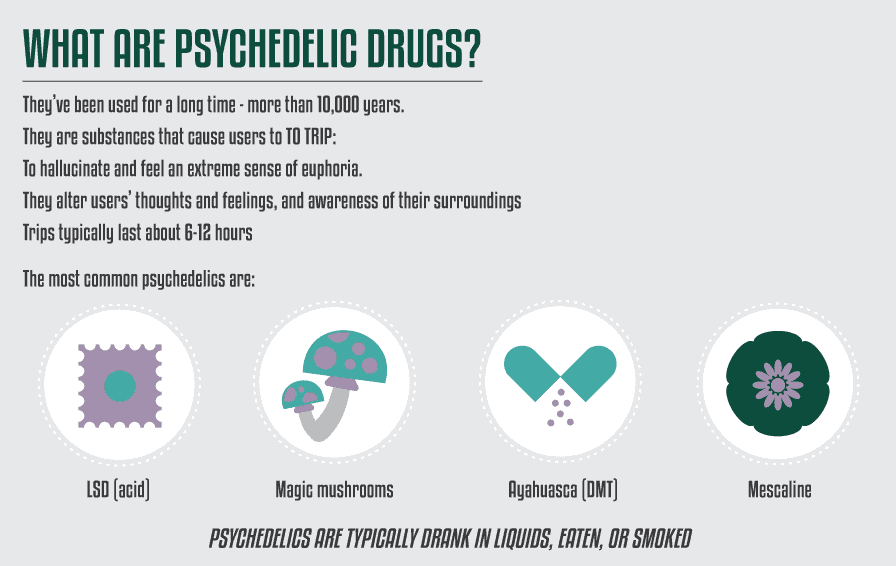 Psychedelic drugs are mind-altering substances that produce changes in perception, mood, and cognitive processes. These changes can be minor, such as visual distortions, or they can be more significant, such as hallucinations or synesthesia. Synesthesia is when senses are confused, so you might see sounds or taste colors. Psychedelics can be natural, such as magic mushrooms, or they can be man-made, such as LSD.

Some increase serotonin activity, like LSD, psilocybin mushrooms, and DMT. Other psychedelics work on the sympathetic nervous system, like ecstasy. These drugs can be taken in different ways, depending on the drug.

Psychedelic drugs have been used for religious and spiritual purposes for centuries. In the 1950s, they became popular in the United States as part of the counterculture movement. Researchers also started to study their potential therapeutic benefits in the middle of the 20th century.

LSD, or lysergic acid diethylamide, is a synthetic psychedelic drug. It was first synthesized in 1938 by a Swiss chemist and has been used recreationally since the 1950s. LSD is one of the most potent mind-altering substances known to man. A single dose can produce effects that last up to 12 hours.

Some effects of LSD include:

LSD is commonly referred to as acid, blotter, doses, dots, and tripping. It is typically sold as a liquid, but it can also come in tablets, capsules, or soaked into a paper cut into small squares. These squares are called acid tabs or blotters.

Dangerous Side Effects of DMT DMT is short for dimethyltryptamine. It is a powerful psychedelic drug found naturally in some plants and animals. The drug is also known as the spirit molecule because it produces intense spiritual experiences and hallucinations.

People take DMT in several different ways. It can be smoked, injected, snorted, or taken orally. Dangerous side effects of using the drug include:

In high doses, DMT can cause seizures, coma, and even death. The drug can also lead to long-term mental health problems, such as psychosis.

Psychedelic mushrooms are also known as magic mushrooms, shrooms, and boomers. They are a type of fungi that contains the psychedelic drug psilocybin. Psilocybin converts into psilocin in the body, which is responsible for the hallucinogenic effects.

Psychedelic mushrooms can be eaten raw, cooked, or brewed into a tea. The most common way to consume them is by drying and eating them. The effects of psilocybin can last up to six hours. Adverse effects of the drug include:

Many people do not consider magic mushrooms addictive, but they can cause people to develop a tolerance. This effect means that users need to take increasingly high doses to get the same effects. Someone with an increased tolerance may also develop a dependence on the drug, which is a telltale sign of addiction.

What Are the Risks of Taking Psychedelic Drugs?

These drugs are also illegal in most countries. This ban means that they are not regulated, and there is no way to know if they are pure or safe. Taking psychedelic drugs can also be mentally dangerous. The risks include:

If you or someone you know is struggling with psychedelic substance abuse, we can help. Our team of addiction specialists will create a customized treatment plan that meets your unique needs. With flexible partial hospitalization and intensive outpatient programs, you can continue working and living at home while receiving help.

Finding help for substance abuse treatment does not have to be difficult. Call 425.414.3530 today to get started with a recovery specialist.